On July 1, 1867, Canada became a self-governing dominion of Great Britain and a federation of four provinces: Nova Scotia; New Brunswick; Ontario; and Quebec. The anniversary of this date was called Dominion Day until 1982. Since 1983, July 1 has been officially known as Canada Day. What Do People Do? In many towns and cities, municipal governments organize a range of events, often outdoors. These include pancake breakfasts, parades, concerts, carnivals, festivals, firework displays and... [read more]

30 Tips for Increasing Your Home's Value ... Learn ways to add value to your home no matter what your budget! 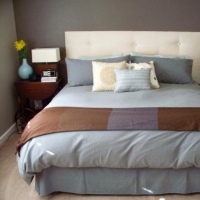 Home Improvements: Under $100   Neutral-color paint is inexpensive and adds style. Tip 1: Spend an hour with a pro. Invite a realtor or interior designer over to check out your home. Many realtors will do this as a courtesy, but you will probably have to pay a consultation fee to a designer. Check with several designers in your area; a standard hourly fee is normally less than $100, and in an hour they can give you lots of ideas for needed improvements. Even small... [read more]